The City By The Bay

Friday, May 27 was the first official day of our San Francisco Bay adventure. Sadly, Daugher-In-Law Nicole had to work and couldn't join us. After taking care of a minor car maintenance issue, Sons Brian and Donald, Hubby Tony, and I piled in for a drive into San Francisco (approximately an hour away).

Just before we arrived at the city, we got off the interstate and made our way down the Great Highway which runs along the Pacific coast, then turned into the Golden Gate Park and drove around. The large green space reminded me of our local Forest Park. We got out of the car for a short trail walk, but then decided we were hungry and headed to Fisherman's Wharf.

Brian parked the car, and we walked to Boudin Bakery on Pier 39, which is famous for their sourdough. We ate outside, then wandered over to see the sea lions: 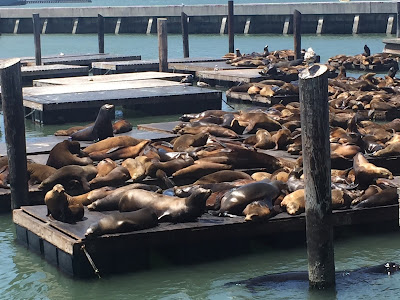 We strolled around the pier, browsed in a few stores, then started meandering south along the Embarcadero right next to San Francisco Bay. When we got to the Ferry Building we stopped to use the bathroom and get a cup of coffee, then continued on our way. After a short detour to see the corporate office of Son Brian's company, we made it to AT&T Park, where the San Francisco Giants play baseball.

That day the park was holding a graduation ceremony for San Francisco State University. The sidewalks were filled with thousands of graduates and their entourages.  Many of them were wearing leis along with their graduation robes, which was a new to me tradition. We sauntered around the stadium looking at the plaques and statues, then walked over to the Caltrain station to meet Nicole who came into the city after work.

A short train ride brought us back down to Pier 39 for dinner at the Fog Harbor Fish House. My linguine with clam sauce (garnished with fresh clams) was the best I've ever had. I was tempted to lick the bowl clean, but settled for getting out the last drops of sauce with a tasty piece of sourdough.

After all that adventure it was time to head home. My feet said it had been a very long day. My phone app agreed, registering 21,163 steps and 8.5 miles.