Friday night Hubby Tony and I had a night that didn't quite work out the way we thought it would.  Right after he got home from work he changed his clothes, grabbed a baseball cap and a water bottle, and we left the house. First we dropped his car off so he could have some service done the next day, then we walked a half mile down Manchester to Joey B's restaurant for dinner.  The restaurant is only about a mile and a half from the house, so after dinner we worked on getting our steps for the day by walking home.

During the walk we had a nice time catching up on what had gone on during the week, but the temperature was in mid-80s and by the time we turned onto our street I was hot and tired. My feet hurt and I was looking forward to a big bowl of frozen watermelon on the couch in front of the TV. As we walked up the driveway it occurred to me we'd been having some problems with the garage opener keypad and neither one of us had brought a house key. Sure enough, when I tried putting in the code nothing happened. Then Tony tried and got the same result. 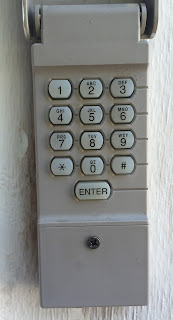 We checked every door into the house. All were locked. Tony didn't like my suggestion to use a rock to break a window, so we had to come up with another plan.  I threw out that the keypad battery maybe needed to be replaced, so we walked to Walgreen's (adding another mile to our total).  Tony borrowed a screwdriver from a neighbor and we took the old battery out, installed the new one, and crossed our fingers as I punched in the code. Still nothing.

Son Donald had a house key, but he was at work for another four hours.  Our cat sitter has a key, so I called his cell phone. The call went to voice mail and I left a message. I called the cat sitter's mother at their house number and had to leave another message. By this point I was getting really grumpy. Just about the time I was ready to go break a window myself my cell phone rang. It was the cat sitter, saying his mom would be at the house with the key within 15 minutes.

While I waited I researched garage door keypads and figured out we might have a reprogramming issue.  The fix sounded easy--if you had access to the inside of the garage.  The cat sitter's mom was right on time, and both Tony and I thanked her profusely.  When I walked in the house the cats woke up from their nap and wanted to know if anything exciting had happened while we were gone.

The next morning it took us about 45 seconds to fix the keypad problem.  Even so, if I'm on foot it will be a while before I don't triple check to make sure I have a way to get back into the house before I leave.