Over the past week Hubby Tony has been making a renewed effort to rid our office of unneeded papers.  I've been his right-hand woman on the project.

We've tackled portions of the job several times.  This round it was a pile of bank statements (from our current bank, and a smaller pile from a previous incarnation of the same bank) and investment company statements.  Altogether, there was about five years worth of papers taking up valuable space in a file cabinet drawer.  Starting with the bank statements, Tony divided the pile in half.  We scanned through each one to make sure there wasn't anything important on it, then it went into the shredding pile. 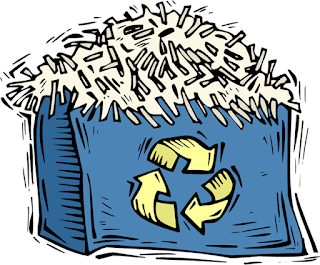 Our shredder works well, but slowly. It says it can handle six sheets at a time, but depending on the thickness of the paper you get better results if you only feed piles of two or three.  I set the machine on top of the kitchen island, with the pile of papers next to it.  It didn't take me long to get into a rhythm.   I took a break approximately every five minutes so the shredder didn't overheat.  When the shredder bin filled up I'd transfer the mess into a paper bag, packing the shreds down.  When it was packed to the brim I'd close it up, throw it in the recycling bin, and start a new bag.

After the bank statements, Tony tackled a backlog of statements from past 401(k) plans he participated in.  Some of these had colorful logos, graphs, or charts, which lent a little accent to the boring white shreds.  The last thing to go was a pile of checks, which added a large pop of color to the pile.

Two days and three large bags of paper later the project is done.  Until the next time we decide to tackle it.