Today I'm participating in the Six Words compilation over at Coach Daddy.  This month's prompt was:


"June is National Safety Month. Tell us about something you did decidedly unsafe – in six words. It could be from any time in your life. Think “Rode Big Wheel off garage roof,” or “Wore Georgia gear in Florida section.”

It was a hard prompt, because I'm not much of a physical risk taker. (You should go check out some of the other responses. Those people are real daredevils!)  However, Eli's invitation brought up a long-forgotten memory from my childhood.

I was nine or ten, and had been gifted with a pair of Sears white high-top roller skates. The first thing I did after putting them on was skate over to the house of a friend who lived a couple of blocks away. It was hard work, because the street inclined up and her house was at the top. 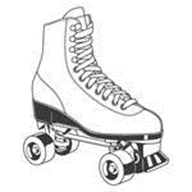 My friend admired my skates, then put hers on and suggested we skate down the hill. Down sounded better than up, so I agreed. After a couple of round trips, she wondered out loud if it would be possible to do the same thing backwards.  Remember how I told you I wasn't a risk taker?  She was so confident that it wouldn't be hard to do that somehow she talked me into doing it first.

Going past the first house wasn't too bad, but then I started gathering speed. However, before things got out of control instinct kicked in and I started doing an exaggerated snowplow, spreading my legs out and pointing my heels together.  It took me the distance of another house to start slowing down, but I managed to come to a stop without losing face (or falling on it).