Do You Know The Way To San Jose?

I do now. (Or at least I know how to get there from Son Brian and DIL Nicole's apartment.)

Monday morning of our latest California adventure the entire family piled in the car and we drove to Willow Glen, one of the city's neighborhoods for lunch.  Afterwards we got back in the car again and went to the Winchester Mystery House, where we bought tickets for a tour. 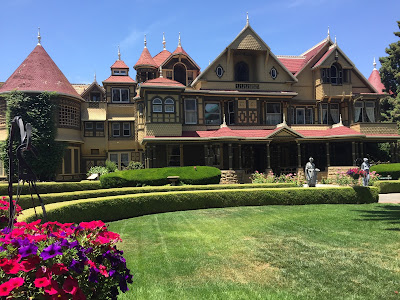 
The Winchester Mystery House is a mansion in San Jose, California, which was once the personal residence of Sarah Winchester, the widow of gun magnate William Wirt Winchester...the Queen Anne Style Victorian mansion is renowned for its size, its architectural curiosities, and its lack of any master building plan.

Ever since the construction commenced in 1884, the property and mansion were claimed by many, including Winchester herself, to be haunted by the ghosts of those killed with Winchester rifles. Under Winchester's day-to-day guidance, its "from-the-ground-up" construction proceeded around the clock, by some accounts, without interruption, until her death on September 5, 1922.

While we waited for our tour to start we wandered through the beautiful gardens and peeked into a few of the outbuildings.  When the PA system said it was our turn we moved to the gathering area.  Before we could enter the house, each group was arranged in front of a green screen for a quick photo.  The first thing the guide told us was to stay with the group or they could get lost.  As we began to walk through the labyrinth of rooms and hallways I understood the warning.

Our hour long tour took us through 110 of the 160 rooms.  Along the way our first-rate tour guide told us stories about the building of the house.  He pointed out secret passageways, doors that opened into blank walls, and a staircase from the floor to the ceiling.  I was impressed with the beautiful hand-laid parquet floors, art glass, and wall coverings.  I thoroughly enjoyed my visit.

After the tour was over everyone was tired, so we drove back to the apartment to rest up for our dinner excursion at a nearby hot pot restaurant.   It was close enough to walk, which was a good thing, because after I ate all my food I definitely needed the exercise!