Today I had three locations to visit for work. Last night I plugged the addresses into Mapquest to figure out exactly where they were located,  I thought I knew what the best itinerary would be, but just before I hit the button to get the directions I saw a new-to-me toggle button that said:

"Should we re-order your stops to get the most optimized route?" 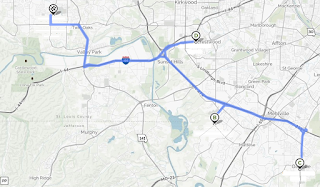 Out of curiosity I decided to turn the button on and see what happened. It turns out that Mapquest was smarter than me when it came to  driving efficiency. Their way was eight miles shorter than mine. In addition to being shorter, their optimized route was designed such that most of the turns I made were to the right (and all but one of the left turns happened at a stop light with an arrow).  That saved me a lot of time sitting in the left lane waiting for a break in traffic so I could turn.

I left the house at 9 in the morning, did my tasks, and was back home by noon.  I think this will not be the last time I take advantage of this feature.