Every day from December 1st until Christmas I'm hanging an ornament in an outside public place as a Random Act of Christmas Cheer.


Today I did a new-to-me project that involved organizing and restocking three specific brands of toys at a local big box store.  When I found out everything that was involved in the task I almost backed out, but I decided to face my fear head on.  After lunch today I pulled into the store parking lot and hung an ornament first. 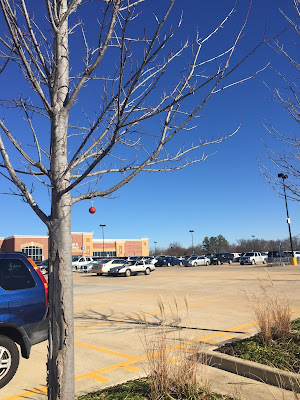 The job wasn't as scary as I thought it would be, but I wasn't able to perform it according to my written instructions. The department manager had only been on the job for two days and had no idea where things were.  He unsuccessfully attempted to contact the previous manager (the person was at lunch).  Finally, someone came with a note scribbled on the back of an envelope indicating several trailers parked out back that might have the products I needed.  I followed that person out to the trailers, where we searched unsuccessfully for ten minutes before giving up and returning inside with no merchandise.

I straightened the areas to the best of my ability,  took some photos to document what I did, and had the manager sign a form saying I had been there.  We'll see what the company says about my efforts.

Five years ago today: Something Old, Something New
Posted by Kathy G at 3:41:00 PM