Whose Room Is It? 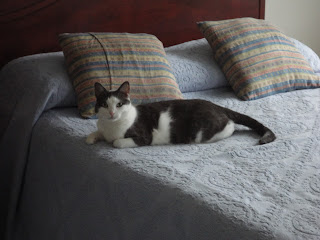 Tonight the family will begin assembling for our annual "Birthday Bash" weekend.  There are three birthdays in June and July, so a couple of years when the boys started moving out of the area and "home" was a long car ride or plane trip away we decided to celebrate them all together.

Son Tony will arrive from Phoenix tonight and sleep in the room he grew up in. One problem, though.  Pepper the Cat now considers that bed his.  Every morning when I get up I find him sprawled out next to the pillows, and after he eats in the afternoon he goes back and stays there until he hears dinner being put on the table.

I know Son Tony likes the cats, but they make him sneeze.  We've had a cat in the house the whole time Tony was growing up.  He didn't have any problems as a youngster, but after his first semester of college he came back home and found he was allergic to cats. When he comes I make sure the room he sleeps in is de-haired as much as possible.  And make sure there's allergy medicine in the house.

Today when I got home from work I ran my hand over the part of the bed that Pepper likes to lay on.  When I was done the gray hair that had been spread in a smooth layer over the bed had turned into a large wad, which I threw away.  I removed the bedspread to carry it down to the laundry room.  Pepper was standing in the doorway waiting for me to get done so he could get on the bed and start his mid-afternoon nap.  He didn't understand why I nudged him out into the hallway and closed the door behind me.  He followed me down the stairs with a sad look in his eyes and took a post in the kitchen where he could watch what I was doing.

I put the spread into the washer, and moved it to the dryer when the washer stopped.  I stopped the drying cycle several times, both to untangle the large spread so it would dry evenly, but also to clean large quantities of lint and cat hair out the lint filter.

After dinner I carried the vacuum cleaner up to the second floor.  Pepper was sitting on the steps; he followed me up and tried to escape the vacuum (which he hates) by running into his room, but of course the door was closed so he doubled back down the steps and disappeared.  He was nowhere to be seen when I carried the freshly-cleaned spread back up to the bedroom.

Tony will keep the door closed while he's staying in the house.  Based on past experience, it won't take long after the room is vacated for Pepper to re-claim it.
Posted by Kathy G at 6:31:00 PM