Last week I got an email from Saleem's West (a Lebanese restaurant I've eaten at several times) telling me that tonight a crew from the Travel Channel would be there filming for an episode of Food Paradise about garlic.  I've never watched that particular show, but thought it would be fun to eat dinner at Saleem's tonight and check out the action.

Hubby Tony and I arrived at the restaurant a little after six, and there was a big sign on the door stating that if we didn't want to be filmed we should NOT enter. The bar area was filled with people, but I was pleasantly surprised that we didn't have to wait for a table. We were seated in the center of the main room, right behind where Simon Hanna (the restaurant's chef) was being interviewed. His back was to us, and an operator was behind a large camera on a tripod facing him.

The hostess placed our menus at two of the four seats at the table and we sat down. Five minutes later one of the video crew came over apologetically and asked me to move to the other side of the table;  I was blocking the view of the dining room behind me.

I'm sure the restaurant was expecting a big crowd for the special event, so they were only serving a limited menu.  There were a few appetizers available (in addition to roasted garlic heads with pita bread, which were on the house), a couple of salads, and a choice of four entrees. 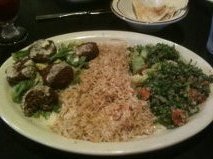 Tony and I both ordered a “Bloody Miracle”, basically a Bloody Mary with fresh-pressed garlic on top, and heads of roasted garlic. Both were very good.

For dinner I chose the Falafel-Tabouli Combo. One side of my plate contained five small falafel patties on a bed of lettuce with tahini sauce, the other side held the tabouli salad, and there was a large serving of rice in the middle. Tony ordered Chicken Sharwarma. His char-broiled chicken was topped with onion, parsley, lettuce, tomato, and tahini dressing and came with a scoop of the same rice.  For dessert we shared a small square of baklava (the only option available, but the one I probably would have chosen anyway.)

Halfway through dinner another one of the the camera crew came to our table and asked us to sign a release form.  At the bottom, he'd hand-written a description of what we were wearing (I guess so he could match up the paperwork with the faces on the video).

As we were waiting for our check Middle Eastern music began playing over the speakers and a belly dancer came out from the bar area. She worked the dining room, using finger cymbals, a sheer veil, and a sword balanced on top of her head.  The entire performance was captured on video.  We left before the advertised garlic eating contest, but I'm sure that got shot, too.

The Garlic show will air sometime in October.  I'll definitely be looking for it!
Posted by Kathy G at 9:35:00 PM