A middle-aged woman in the middle of a hot flash is the perfect setup for a joke.  Until you're the butt of the joke. 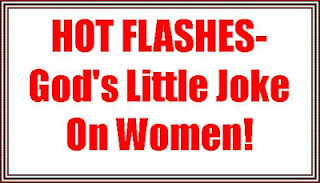 For the past six months I've been having occasional problem with hot flashes, but the last two weeks they've kicked into high gear and I'm miserable!  If you're a woman of a certain age, you know the drill. You're minding your own business, and suddenly there's a wave of heat rushing through you.  Your face feels like it's on fire, and the sweating causes your clothes to stick to your body. As quickly as it comes, the feeling passes. Until the next time.

I know the flashes will eventually go away, but that could be months or years from now.  In  the meantime, I researched what I could do to help alleviate them.  Some suggestions:
That's where you, dear reader, come in.  If you've been through hot flashes and lived to tell (or know someone who has and have an idea) please leave me a comment and let me know what worked for you.  PLEASE?
Posted by Kathy G at 7:51:00 PM