I have fair skin, blonde hair, and blue eyes.  When I was younger I tried my darndest to tan, to no avail.  Eventually I gave up trying.  Several months ago I purchased a Groupon for UV-free tan sessions.  The price was right, and I've always wanted to try spray-on tanning.

I kept looking for "just the right time" to use it; summer turned into fall and the weather got cold.  Even though my body's covered in clothes now, today I went and used the first of the two sessions I purchased.  This morning I showered, exfoliated, pumiced, and lotioned my body.  I picked out old clothes (some athletic pants and a polo shirt) so I didn't have to worry if chemicals got on them.

Although it seems like there's a tanning salon in every strip mall, I've never been in one before. The front desk was staffed by a bronzed 20-something, who was quite helpful.  Before I could indulge myself, I had to fill our a bit of paperwork, then go on a quick tour of the facility.  As part of the tour we stopped in the sunless tanning room, where I got a quick lesson in using the booth.  It seemed pretty easy, but there was also an instruction poster on the wall in case I forgot any of the steps.  We went back to the desk so I could sign the required waiver, then I was free to do my fake tanning. 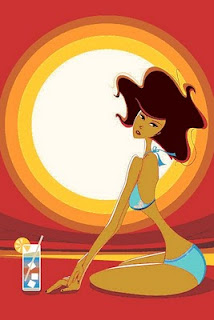 The instruction poster showed a smiling model in a bikini. I decided to be daring and go for a full-body tan. (Not that anyone would see it.)  I took off my clothes and laid them on a chair, put a disposable cover on my hair, and applied lotion to my feet, elbows, and hands--places where the tanner was likely to accumulate.  I read the instructions on the wall one more time, took off my glasses, and entered the shower-like booth.

There was a green button on the far side of the enclosure that started the spray.  I pushed it, and after a few seconds a very fine mist of sunless tanning solution (mixed with a bit of bronzer for immediate color) started coming out of a row of nozzles on the wall. My eyes were closed, but I could feel the moisture moving from my face down to my legs.  It took about 20 seconds. The mist stopped, and I turned around so I could do the other side of my body.

When the mist stopped, I waited in the booth for a few minutes to let my body air dry, then stepped out and patted off the rest of the moisture with a towel.  Although I was dry, my body felt sticky, like I had a heavy layer of sunscreen on.  I dressed, left the salon, and drove home. Every time I came to a stop light, I pulled down the rear view mirror and took a look at my face, which was substantially darker than I'm used to.

The instructions said not to shower for at least 4 hours, because it takes that long for the solution to be fully absorbed by the skin.  Three hours after I got home, I checked the progress of my tan. It looked pretty good, except for my palms, which were brown (with white lines). I guess I didn't use enough lotion on them.  However, after dinner I noticed that my palms were even darker, and so were the bottoms of my feet.  My knees were overly dark, except for a weird light-colored spot on my left knee that somehow hadn't been sprayed.

However, after a shower I looked better.  Much of the splotchiness had disappeared. I suspect it was from the bronzer, which came off with soap and water. This is the best tan I've ever had. My body has a nice light brown tone, and although my knees are still a bit darker than the rest of my legs I'm not too concerned.  They'll be covered up and no one will see them!
Posted by Kathy G at 9:56:00 PM