The weather here this week is crazy!  Over the weekend we had a freeze, but today's projected high of 76° will come close to breaking a record.  Things are due to change in a few days, so I decided to take advantage of the way-above-average temperatures and spend as much time outside as possible.

Instead of going to the gym to get my exercise, I came home and mowed the lawn (not so much to cut the grass but to mulch the leaves that had fallen on top of it).  I actually got sweaty! Afterwards I broke out the flip flops I'd stowed in the back of the closet, then grabbed the newspaper and went out to the porch to read it. 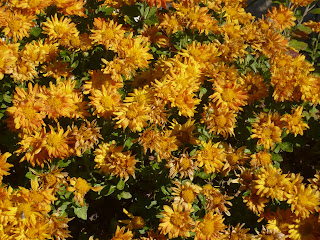 My seat provided me a good view of the front yard landscape. There's only a few flowers left in the beds next to the house...a half-dormant dianthus sporting four pink blossoms, several alyssum plants covered in tiny white clusters, and a large mum plant.  Most of it's yellow-orange flowers were spent, but there were fresh blooms interspersed throughout.

I was holding the newspaper in front of my face to keep the sun out of my eyes when I saw movement off to the right. The mum plant looked like it was alive!  Upon closer inspection, it wasn't, but there were dozens of insects buzzing around it.  I saw several types of small butterflies, house flies, a few beetles, and bees from tiny to large.  They flitted from one bloom to another, getting whatever nourishment they could.  Occasionally the butterflies perched on the flowers and opened their wings to bask in the sun.  They were enjoying the weather just like I was!

However, good things never last.  Within 20 minutes the sun dipped behind the house across the street and it started to cool off.  My feet started to get cold in their flip flops.  It was time to go in.
Posted by Kathy G at 5:50:00 PM