We had granite counter tops installed in the kitchen back in January.  This is what the room looked like then, with light peach walls: 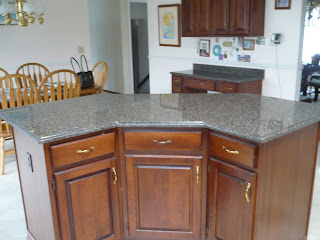 This is how it looks now, with newly-painted khaki walls: 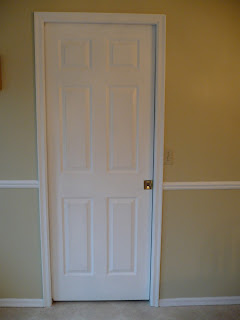 It's taken me almost a year to get around to it, but since I've been on vacation this week I've been busy giving the kitchen a fresh look.

Why did it take me so long to get this job done?  I don't know, but it did take quite some time to pick the color.  I got paint samples from the hardware store and stuck them up on the wall under the cabinets.  That wasn't a great place, because soon I was looking past them every time I got a plate or cup out.  The project rose to the top of the To Do list when I remembered I was off work this week.  I chose paint, and went to the store to buy a gallon.

It took days to get the room done.  Our kitchen is quite large, with a lot of wall area. The first floor of our house has 9 foot ceilings, and part of the kitchen is vaulted; in some places the walls are more than 11 feet tall!

Day One of the project was all about preparation.  The tops of the cabinets hold a selection of objects d'art and other knickknacks that had to come down.  I put them in milk crates and moved them to the dining room.  The artwork came off the walls, and the outlet covers and faceplates came off.  I washed all the walls with TSP, rinsed them, then let them dry.

Painting Day started bright and early. After breakfast I moved all the plants to the kitchen table to get them out of the way and shut down the computer. I opened the paint, grabbed my brush, then climbed the ladder and got to work.  Immediately I could tell there was going to be a problem.  Even standing on a ladder I couldn't reach to the top of the wall in the vaulted section. I pressed Tony into service, since he's several inches taller than I am.  He was able to reach most of it, but there were still a couple of places where the countertop was in the way and he couldn't get the ladder in the right place.  When Son Donald stopped in for a visit I hoped he could take care of it; since he has almost four inches on his dad,  . He did his best, but there were still several spots that weren't completely covered.  In the end I attached a paint brush to the end of a mop handle, stood on the ladder, and dabbed at the offending spots till they were covered.  The rest of the job went well, although I had underestimated how long it would take.  I thought I did a good job, but when the paint dried I saw several places that needed retouching, which took an additional hour.

Once the walls were pristine, I devoted Day Three to the woodwork...there were floorboards around the room, chair rail on half of it, two six-panel doors and door frames (laundry room and pantry), and six windows-two of them directly over the kitchen sink.  This part also took longer than I thought it would.  I'm not particularly good at detail work; even though I tried to be careful, I had to clean up a lot of mistakes and paint splatters. However, the combination of shiny white paint against the dark walls was worth all the work.

Now that the painting is done, I'm working on putting everything back together.  I already know that not all of the decorations will fit with the new color scheme.  Some of them are headed for the donation pile, but a few of them I'll be able to recycle.  That's a project for another post, though!
Posted by Kathy G at 2:03:00 PM