Tonight our hometown St. Louis Blues hockey team is playing against the Dallas Stars in the seventh (and last) game of the second round of the NHL Stanley Cup playoffs. The series is tied, and whoever wins gets to move on to the next round. The Blues, who began playing in 1967, are the oldest active NHL team never to have won the Stanley Cup.

I'm a fair weather hockey fan, but for the past few weeks I've been caught up in all the excitement. It looks like I'm not the only one. When Hubby Tony and I were out for a walk tonight, we saw these signs taped to a pole: 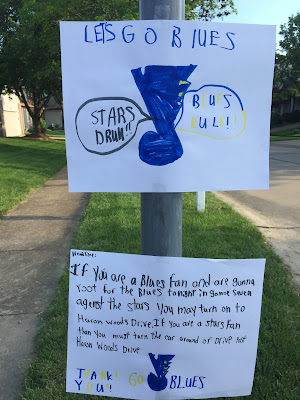 A close up of the bottom sign. By the quality of the writing I assumed this passionate follower was on the younger side. 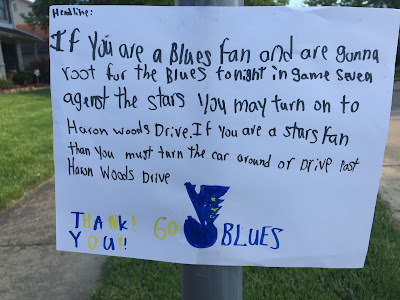 Five years ago today: The Chiropractor Is Usually Right
Posted by Kathy G at 8:27:00 PM