Even though Son Donald has moved out of the house he still occasionally gets mail here. Recently the carrier put this official-looking envelope in the mailbox:


I took a picture of the envelope and sent it to Donald, asking him what he wanted me to do. Some time later he responded and asked me to open it. Inside was a Sample Transportation Certificate of Title and an invitation to come to a sale at the dealership where he bought his last car. 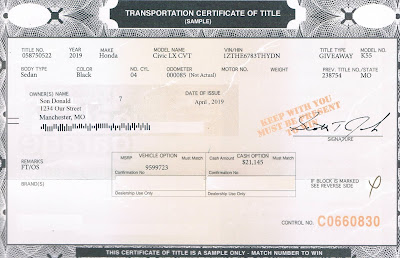 Donald said I could put this 'important' letter straight into the recycling bin. I did.