What's On Your TV?

This December I'm participating in An Advent of Gratitude to help remind me of the gifts I already have, what I often take for granted, and what I can and should be grateful for.

Today's challenge called me to pay $1 per TV, and pay $1 extra if I subscribed to Netflix. 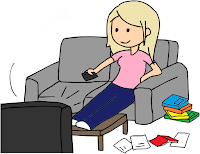 We have two televisions in the house, but the one downstairs is an old CRT model that we only use for the occasional exercise DVD.  Since it won't broadcast any more I didn't count it.  That's one dollar.

It was just last month that Hubby Tony and I discontinued our cable service.   Now the only paid video option we have is Netflix.  It's ironic, considering that Consumer Reports says that there are more than a dozen different video streaming services.  I posted that point on the Advent of Gratitude Facebook page, and got the response  "I wrote this according to what I subscribe to -- never expecting thousands of people to also participate! The original intent was to make ME grateful -- and I have one TV AND Netflix."

And I'm grateful, too.  As such I added an additional dollar to my total.