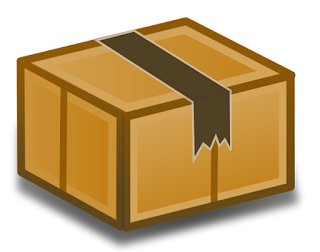 It looks like January is shaping up to be a month of package issues for our house.

Yesterday the doorbell rang.  As I was opening the front door I saw a UPS driver walking back to his truck. He had left two boxes on the porch-one a small case of diapers and the second a box of baby wipes. With Grandson Jay and his parents back at the house I carried the boxes in and didn't think anything about it, but when I mentioned them to Daughter-In-Law Nicole she indicated she hadn't ordered anything.

I took a good look at the mailing label. It had the correct address, but the addressee was an unfamiliar  woman's name. A Google search for the name didn't provide any information, so I called UPS and explained the situation. They said they'd have the driver pick up the packages today.  I put the boxes back on the porch. Just to be on the safe side, I took a time and date stamped photo to show they had been there.

This afternoon the bell rang again. This time Son Brian was closest to the door and brought in two FedEx packages. One was addressed to Hubby Tony, and the other had the same incorrect combination of name and address from the previous day. This time Son Donald took it upon himself to do the research, searching for the woman's name in Facebook. He showed me the results; when I scrolled down I saw a photo of the woman with a young man I recognized as the son of one of my neighbors.

I called the neighbor and explained the situation. He verified that I was was correct; his son and his girlfriend were living at their house. (The neighbor's house address is just one digit off from ours). I told him I'd bring the packages in from the front porch; they could pick them up and call UPS to explain the mix up.  Twenty minutes later I heard a polite knock on the door. When I looked the UPS driver was standing on the porch. I opened the door and described the situation. The driver offered to drop off the packages down the street.  I let him.

Ten minutes after that there was another knock on the door. This time it was the woman and the neighbor's son come to collect the last package.

I hope there's no other mix ups, but if it happens again I won't bother involving the courier companies.