Wednesday I arrived home from a trip to the San Francisco Bay area of California.  Today I'm leaving home again, this time for a weekend meeting halfway across the state at the Lake of the Ozarks.

The transition from one jaunt to the other isn't as seamless as it should have been, and it's all an airline's fault.  Shortly after Hubby Tony and I got to the airport Wednesday morning we found out that, because of a mechanical issue, our flight was going to take off two hours late.  What should have been a mid-afternoon arrival back into St. Louis didn't happen until after 5:00.  By time we took the shuttle to the parking lot, retrieved the car, and drove home in traffic it was almost dark.  I was hungry and jet lagged.  The nice meal I thought I was going to have time to cook turned into pork burgers and beans, which gave me indigestion.  Then, for the rest of the evening every task I worked on took twice as long as it should have. 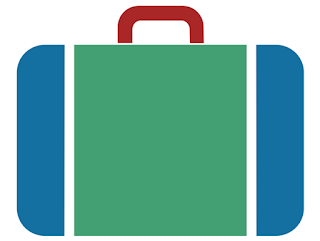 Yesterday I was moving slowly, but I kept plugging along because there was so much to do...work commitments, grocery shopping, and tasks around the house.  I tried to take the easy way out whenever possible.  For example, instead of unpacking my suitcase, I left it on the floor of my bedroom and restocked it with the freshly washed vacation clothes I took out of the dryer.

Sunday night I'll worry about putting everything away in the correct place. Then work on recovering all over again.