Is there anyone who doesn't know that here in the United States we're having an election today?

The marquee races were for President and Vice President, but in my area there were also many others. On the national level we were electing a U.S Senator and Representative. At the state level candidates were vying for Governor, Lieutenant Governor, Secretary of State, Treasurer, State Senator, and State Representative.  On top of that, there were also seven amendments and propositions, and 13 retention votes for judges of various levels.  Some municipalities and school districts also had additional issues. 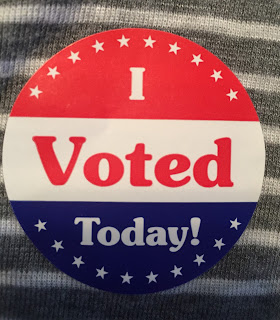 For each election, Hubby Tony and I get a notification mailed to the house about a week ahead of time.  Usually the information comes on a simple post card. This time it was the outside page of a sample ballot, which was really helpful.  Ballot in hand, I went to the League of Women Voters website, researched the candidates and issues, and marked my sample with my choices. That made it faster when I was in the booth.

I got to our polling place (the local high school) a little after 9 this morning.  Usually its parking lots are filled up with teacher and student cars, and I wondered how they'd handle all the extra voter vehicles. There were plenty of spaces, because the district had cancelled classes for the day.  There were about a dozen people ahead of me in line, but they had a lot of stations available and the whole process only took me 15 minutes.

There were two options for voting: touch screen or paper ballot The touch screen line was longer, so I chose paper. After I got my ballot I filled in the little circles with a black pen, then carried it over to an optical scanner and fed it into the slot. On the way out I got a sticker.  As I ran my errands today it was interesting to see how many other people were advertising the fact that they had cast ballots, too.