Last Saturday the Tailgate Open dashboard light on my car came on. After opening and closing the door multiple times had no effect I decided to ignore the light.  Bad idea.  Monday I went to start the car and nothing happened; the battery was completely dead.  I called AAA.  After the driver jumped the car he determined it was probably a bad switch, which the cargo area light to be on the entire time, which drained the battery.  The temporary solution was to turn the light completely off.

I called the garage and made an appointment for today to get the problem fixed, and last night I dropped my car off.  Knowing I would be car-less, I didn't make any plans for the day.  Since I couldn't leave the house I took the opportunity to catch up with paperwork and computer projects. It felt good to cross them off my list, but that meant I spent too much time sitting around.

A call came in from the garage telling me the car was ready to be picked up as I was eating lunch. I knew that if I asked they would send a shuttle to pick me up. However, my plan was to use my two feet to get there.  I needed to burn off some energy, and the garage only a couple of miles from the house; I've walked there (and home from there) quite a few times.  However, when I looked out the window I realized that Mother Nature might have other plans for me.

There's a cold front coming through that will ultimately take away the summer humidity and lead to fall-like weather over the weekend, but first we have to put up with a couple of days of rain. The precipitation was supposed to start last night, but it got delayed and the first drops didn't start until 10 AM. After that it alternated between a light drizzle and a steady rain, punctuated by periods of nothing.  But right that minute there was no rain.  My phone app indicated we were in the middle of a slight precipitation lull. 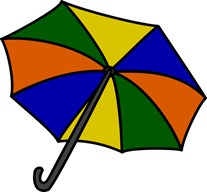 However, in the period of time it took me to put on my shoes and gather my charge card and driver's license a light rain had started again.  The temperature was too warm to put on a plastic rain poncho, so I grabbed a large golf umbrella out of the closet and got ready to walk.  I figured that most of the route was through neighborhoods, and if the rain turned into a deluge I could stand on someone's porch until it died down.

I rarely use an umbrella, so it felt a little peculiar to be carrying one down the subdivision street.  Within the first six blocks I sensed that all the moisture in the air had sent my hair barometer into the red zone. Then I noticed that even though the umbrella was large, a few drops still managed to find my back.  I tried to keep my feet dry, but it only took a few blocks until the toes of my shoes started getting soggy.  After I stepped in an unnoticed stream of water headed towards the sewer I gave up and accepted the inevitable.  Besides, the weather was warm enough that it felt pretty good.

By the time I reached the garage my shoes were sloshing, my back was quite wet, and my hair was an unruly mess.  Even though I enjoyed my walk in the rain it felt really good to drive home in the dry car!