The Price Of Service Was Twenty Dollars 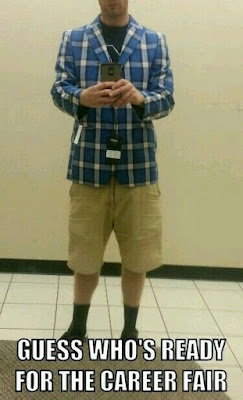 Last Saturday Hubby Tony and I got a series of text from Son Donald telling us know he was going to a career fair on campus Tuesday and a networking dinner Wednesday.  The texts went on to say that he was trying to figure out how to get the needed clothes for both events.  His college town doesn't have much in the way of shopping options for suits and business casual clothes, so I suggested he come home for a shopping trip.

We didn't hear anything more until Sunday at noon, when we got a text telling us he was on the way.  Two hours later when Donald walked into the house he said hello to us and sought out the cats for some pets.  We chatted for a couple of minutes, then piled in the car.  I can't remember ever shopping for clothes as a family before, but time was short (a lot of the stores closed at 6 PM) and we needed to get a lot done quickly.

Our first stop was Kohl's, where you can always find something on sale and Tony had an 'extra 30% off' coupon.  With his event just a couple of days away (and no time to get things tailored), the only option for Donald was suit separates.  Donald started trying on coats with his dad's help while I browsed through the racks for the other pieces. Several trips to the dressing room later Donald had found everything but the suit. Part of the problem was that there was no one on the sales floor to answer questions. I suggested we go to the mall.

We started at J. C. Penney.  Tony purchased his last suit there, and the service and selection had been pretty good.  Not this time.  They had plenty of suit coats and plenty of pants but Donald couldn't find two matching pieces in his size.  The store was busy and all the associates were checking out customers, so there was no one that could assist us.  We headed to Macy's at the opposite end of the mall. There Donald found a sales associate who actually knew what he was talking about. The associate took some measurements, then helped Donald find the perfect pieces.

I figured something from a fancy department store men's suit department would come with a fancy price. I was wrong. The suit ended up costing $20 more than it would have at either of the other two stores.  And we got a "Macy's Money" card that I can use as a nice down payment on a dress for a wedding I'm going to next weekend.

Five years ago today: Mall Walking With A Twist
Posted by Kathy G at 7:27:00 PM