Tending Not To Remember 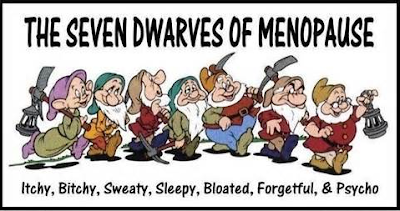 My Sweaty hot flashes started about four and a half years ago.  Since then they've ebbed and flowed in intensity, but for the most part they've been a constant.  Because I wake up hot multiple times each night, of course I'm Sleepy (and, occasionally, maybe a little Bitchy).

I was doing a good job of dealing with those symptoms, but now Forgetful's shown up and throwing me for a loop.  Yesterday I was supposed to prepare four sets of handouts for a couple's meeting.  I forgot about two of the handouts until a half hour before the meeting, and had to scramble to get them done.  Then, somehow I forgot that 'couple' implied two people and only made half the needed amount of everything.

Another example.  Today I was making roasted chickpeas. The Alton Brown recipe I use couldn't be easier:


When the first 30 minutes of cooking were up the oven timer went off, and I reset it.  Then 45 minutes later I smelled something burning.  Guess who forgot to turn off the oven?  The tray of way-too-toasted chickpeas went straight into the compost pile and I started over.

At the rate I'm going I'm afraid to think about what's going to happen the rest of the week.
Posted by Kathy G at 6:27:00 PM