A Bite Of A Bell

On Saturday night Hubby Tony and I went out to dinner.  The Italian restaurant we chose has huge portions, and we're both trying to watch our weight, so we decided to split an entrée (which came with salad, side dish, and rolls) and add an extra dinner salad.

It didn't take long for the waiter to bring a plate of warm rolls, followed shortly by the salads.  Just as we finished the salads he came out with the main course and an extra plate. The dish featured a large charbroiled chicken breast and pieces of yellow squash and zucchini, carrots, broccoli, and mushrooms, all topped with a white wine sauce.  The side of spaghetti was covered in a spicy red sauce.  We moved half of everything to the extra plate, and dug in.

When the food was gone I was comfortably full.  No calorie-laden dessert for us!  We decided if we got hungry later on, we'd eat a piece of fruit.  We paid the bill and left for our evening's activity--an outdoor jazz and blues music festival.  Tony snagged a great parking spot.  We followed the sound of music to a stage a couple of blocks away, where we found seats about a dozen rows back and settled in to listen.  As I looked around I noticed an ice cream store right across the street from where we were sitting.  I'd passed on dessert at the restaurant, but now I was second guessing my decision.  When Tony suggested we walk over to the other stage and see what was playing there, I quickly agreed. 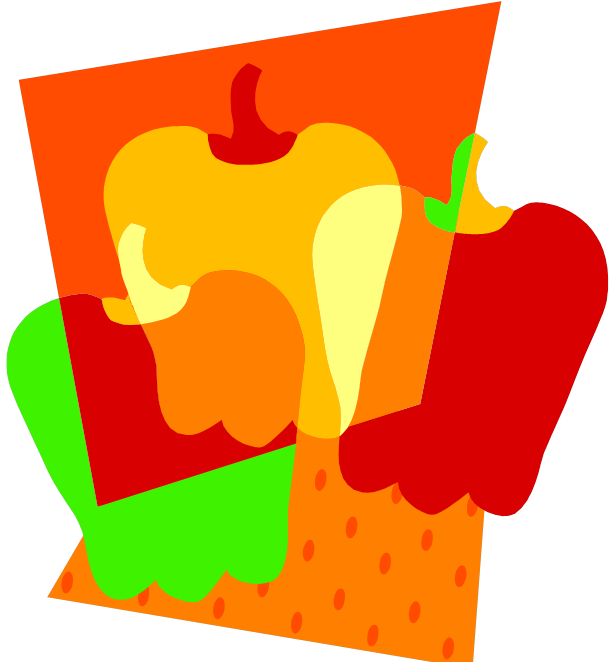 Shortly before we got to the second stage, I saw a grocery store, and knew I could buy a piece of fruit there!  I started thinking about what I'd get.  Maybe they'd have a nice late-season peach or pear.  Certainly there would be a nice selection of juicy apples or pears, or a bunch of grapes.  Any of them would be good.

However,  there was a sign on the entrance door that completely changed the direction of my thoughts.  The sing said that the store had red, yellow, and orange peppers on sale three for a dollar.  Vegetables aren't a traditional dessert, but I can always go for a sweet colored pepper. We got two--one yellow and one orange.  I rinsed them in the water fountain, then used a plastic knife from the eat-in area to cut and seed both.  Tony and I munched on half of each.  I thought they really hit the spot.
Posted by Kathy G at 8:11:00 PM