It was a little more than a week ago that I saw a large fairy ring in the yard of a house not too far from mine.  This morning as I was leaving my street I saw a circle of white mushrooms in the grass two houses from the original one.  It was not there yesterday. 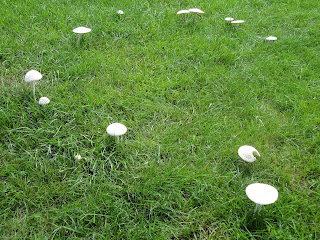 This circle was only about four feet in diameter, but the mushrooms were HUGE! (The picture doesn't do them justice.)

Before last week I'd never seen a fairy ring.  Why, now, all of a sudden would there be two?  I'm sure there are logical, scientific reasons... the last month has been cooler and wetter than average, or the spores blew from one yard to the other, or the lawns need to be dethatched.

However, I prefer a more imaginative answer.  The other day Joanne suggested the original ring was so big because the fairies needed a lot of seating.  Maybe the party got too big and they divided it into two parts, or maybe there was a falling-out and some of the fairies got mad and moved to a new location.
Posted by Kathy G at 8:59:00 PM