Several months ago I made a new duvet cover for the master bedroom by reducing a King sized one down to to fit my Full bed.  I like the way it turned out, but the light, airy pattern and clear colors didn't look right as the days got shorter and the temperature started dropping.  It was time to find another cover for the bed. 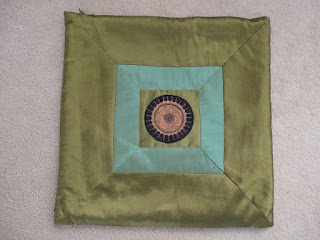 Besides, I always look forward to getting out the silk throw pillow covers we brought home from our trip to China in 2005. They coordinated with the old, departed winter duvet cover; the current one didn't go with them.

The pillow covers became the foundation for a color scheme for the new bedding, which complicated the search.  It was hard enough finding something I liked the first time, but that time my options were wide open.  This second time was really a challenge.  However I enjoy a good hunt so I was up to it.

It took several weeks, but one day I was at the St. Vincent de Paul store and hit the jackpot...a bag containing a duvet cover, shams, and a pair of valences for $10.  Everything had been handmade from a heavy toile fabric (Waverly "Sunset Boulevard", according to the information on the selvidge) and looked like it was in great shape.

I didn't know if Hubby Tony would think the pattern was too feminine.  It had a rosy taupe background with accents of green, dark pink, and brown, and a pattern of pen and ink palm trees, flower bushes, and images of Old Hollywood along with the names of cities in the area.  However, since the green matched the color of the pillow and he'd actually been to many of the cities, he pronounced it acceptable.

According to the label on the bag, the duvet cover was king-sized, so I expected another sewing project.  However, I was pleasantly surprised to find out they'd mislabeled things, and the cover was the perfect size.

The finished product (along with cat accessory): 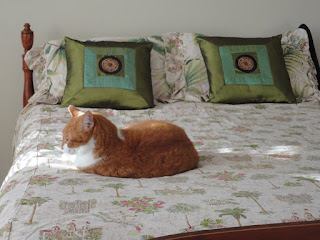