Not Traditional, But Still Good!

Earlier in the month I pulled out my tomato plants and was left with a large quantity of bite-sized green tomatoes.  I put them in a bowl on top of the refrigerator, and every couple of days I've been removing the fruits as they turn red.  They make a great addition to my lunch.

There was more than five pounds of green fruit, though, so I also investigated options for cooking with them. Fried green tomatoes are always tasty, but I couldn't figure out a way to do it with my tiny ones.  A Google search turned up recipes for various types of salsa, pickles, and relish, as well as sauces, soups, cakes, and pies sweet and savory.  One interesting idea was to substitute green tomatoes for tomatillos in a stew dish.  The fruits are different species, and have a slightly different texture and taste, but several Websites offered suggestions for minimizing the differences.  I decided to give it a try.

Son Donald was coming today for a Sunday visit. He usually cooks dinner with Hubby Tony, but this morning I sent him a message letting him know he was teaming up with me today to make Chile Verde. We came up with our own recipe, which incorporated the best parts of four different ones. It started with a Boston Butt roast cut into chunks, browned in olive oil, then simmered for two hours in a sauce containing green tomatoes, onions, two types of hot peppers, lots of garlic, cilantro, oregano, and chicken broth.

The finished product, which we served with tortillas, Spanish rice, succotash, and steamed zucchini: 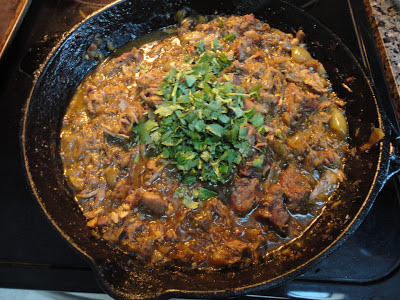 This dish turned out to be a keeper!  We ate until we were full, and there was plenty for leftovers.   As an added bonus, the recipe called for 2 pounds of tomatoes, which turned out to be all the green ones in the bowl (and a couple that were a quarter of the way to ripe). Mission Use Up Green Tomatoes accomplished!
Posted by Kathy G at 9:36:00 PM