When I did my original "new thing a day" project in 2008 I kept a spreadsheet with the things I'd done and ideas for others I wanted to do. I completed a good portion of the list before the year was over, but some of the activities had to wait until the time was right. Like today, when Hubby Tony and I navigated our way through a corn maze.

A corn maze is just what it sounds like--a maze cut out of a corn field. Several weeks ago I bought a Groupon for Brookdale Farms that gave us admission to their maze and a couple of launches with a pumpkin slingshot.  Our plan was to go today, but when we woke up in the morning it was gloomy and we second guessed our decision. At lunchtime, though, the sun came out and the sky turned blue. A perfect day for an outdoor adventure.

The farm was in Eureka, about 25 minutes from the house; we took a scenic route and enjoyed the stunning fall colors along the winding roads.  Even though the parking lot was jammed there was no line at the admission booth.  It didn't take us long to turn the Groupon in for wristbands and tickets for the slingshot.

We decided to tackle the maze first.  According to their Website, the corn maze is the largest in St. Louis.  We walked up to the path that had been cut in the middle of the large expanse of corn plants and started our adventure.

It didn't take me long to feel lost.  As we navigated through the maze we turned right every chance we got, but a lot of the turns ended up as dead ends and we had to double back.  There were signs tucked in here and there that helped break the monotony of the corn stalks-and let us know we hadn't walked by that place before.  Some of the signs had educational facts about corn and some of them featured "corn-y" jokes.  We passed quite a few groups of people (several of them more than once). Everyone looked like they were having a good time. 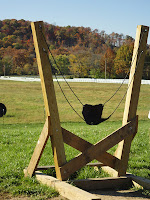 After we finished the maze we took a shuttle bus to the pumpkin slingshot area.  We turned our tickets in and picked our ammunition from a large box of softball-sized pumpkins.   There were two slingshots, and each had several people waiting in line, but I used my waiting time to figure out the most effective way to send the pumpkin flying.  When we got to the front of the line, Tony and I took turns fitting a pumpkin into the pocket, then pulling it back and letting go.  It was very satisfying to watch the small pumpkin arc up and away.  One of the pumpkins we picked had seen better days, and it was cool to watch it break into pieces as it hit the ground.

After we finished shooting our pumpkins we caught the shuttle bus back to the main area.  We got in line for a short hayride, but passed on the pony rides and hay jump.  On the way back to the car we walked through the small petting zoo  where I scratched an inquisitive goat between its horns and crouched down to admire a large rooster.

As we drove out of the parking lot I realized that there are only a few perfect fall days each year, and I was glad I spent this one the way I did.