At work today someone told me August 27th was Just Because Day. At first I thought they were pulling my leg, but later a quick Google search verified they were telling the truth.  Just Because Day is dedicated to doing out of the ordinary things," just because". I'm always looking for a reason to shake up my routine, so of course I was going to celebrate the holiday.  However, it was tough to figure out the best way to do that.

Finally I decided to stop on the way home and buy some fresh flowers, which is something I rarely have in the house...not because they're expensive or fragile, but because the cats LOVE to eat them! Roses are their favorite, but over the years they've munched on tulips, carnations, baby's breath, and cyclamen. When Hubby Tony brings home a bouquet I have to put them in the family room on the fireplace mantel, the only spot that the cats can't get to.

On the way home from work I stopped at a florist and explained what I wanted. The sales clerk suggested an orchid, but each bloom cost eight dollars, more than I wanted to spend. All of a sudden she had an inspiration, hurried into the cooler, and came out with some beautiful deep maroon Asiatic lilies. The stalks, which were two dollars each, had some spent blooms (which she took off), but also sported several unopened buds. I decided to get two stalks, and she wrapped them up in golden-yellow florist paper. 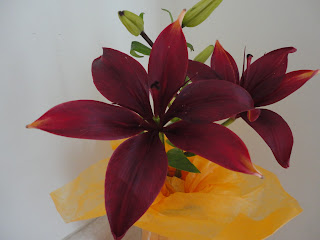 I didn't have a tall-and-skinny vase, so I had to be creative. After I cut off the lower portion of the stems, I put the flowers in a plastic shower gel bottle that was on the counter waiting to go to the recycling bin. I filled the bottle with water, then wrapped it in the florist paper and nestled the whole thing inside a larger vase. The arrangement looked quite nice in the middle of the kitchen table.

I've never had lilies in the house before and wanted to make sure that these flowers were cat-friendly, so I did a Google search. Imagine my horror when I found out that lilies are one of the worst things a cat can nibble on! After dinner the arrangement went on the fireplace mantel.   Do you think I can remember to move it back into the kitchen for our evening meals?