Earlier in the year I experimented with making homemade sauerkraut in a canning jar. It was easy, but after a couple of batches I noticed a problem. The metal jar lids eventually corroded, which made screwing them difficult. I decided to look for a solution.  After a Google search, I decided that crock sauerkraut was the way to go. Basically, you salt cabbage, put it in a crock, then put a plate on top and add a weight so the cabbage is covered in brine during fermentation. 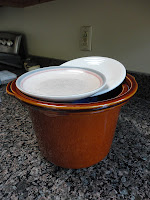 However, you can't make crock sauerkraut without a crock.  I found out that new ones cost somewhere between $30-$40 (which seemed like a lot to me), so I decided to wait until I found something cheaper.  Two weeks ago I was at the St. Vincent de Paul store and found the crock from a Crock Pot sitting on the shelf; it looked new, without any cracks or chips, and it was just the right size.  It took ten minutes of rooting through the saucers to find something the right diameter to fit perfectly inside the crock.  (Since I didn't know the exact volume of cabbage I'd be fermenting at one time and the crock's sides sloped slightly, I got two saucers of slightly different sizes.)  All together I paid $2.25 for my supplies. 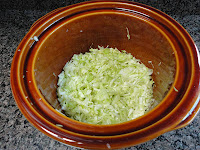 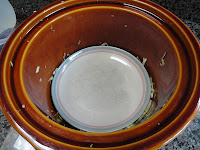 ...then used the correct-sized plate to cover it.  My three-pound head of cabbage only came a third of the way up the sides of the crock.  You could make some serious sauerkraut in here! 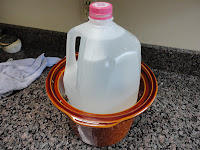 I have quite a few big rocks in the back yard, but didn't think ahead to sterilize one, so I used a water-filled milk jug as a weight.  Looks pretty dorky, but it worked.  After 20 minutes, the weight had pressed out enough liquid so that I could see a layer of brine on top. 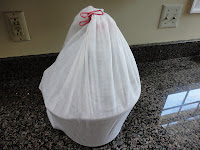 I put everything into an old pillowcase, used a clip to close it up, and moved it to the top of the refrigerator to ferment.  Every couple of days I took it down to check on the kraut's progress.  After a week I pronounced it done, transferred (most of) it to a jar, and stored it in the refrigerator.

The kraut that didn't end up in the jar?  It turned into lunch.