Several years ago Hubby Tony decided he wanted to take charge of dinner one night a week.  After some discussion, we decided Sunday would be a good day.  He picks out the menu, gathers the ingredients, and does the cooking.  The first couple of weeks I found I was giving too much advice (i.e., trying to control things), and banned myself from the kitchen.  I usually go upstairs and read, or during the nice weather go outside and do yard work.

Most Sundays Son Donald rolls in sometime after lunch to hang out and helps his dad cook. They have a great time together.  A couple of weeks ago I decided I wanted to spend some quality time in the kitchen with Donald and announced I'd take back dinner preparations for one week.  Today was the day.

Yesterday was Cinco de Mayo, so I decided the meal would have a Mexican theme. When I saw a post in my Reader this week for chocolate corn tortillas by Stef at The Cupcake Project I decided it sounded pretty easy, so as part of the meal Donald and I would make our own tortillas, something I'd never done before.

Stef's post was on Thursday, and she promised an accompanying tortilla filling was coming, but on Saturday morning I  came up with my own idea.  Son Tony had cooked a wonderful pork roast in adobo sauce when he was in town for Christmas; if I added potatoes to that (and made it more like a stew) I could still have tortillas and serve them like bread.  I went to a Mexican grocery store near the house and bought the special ingredients--masa harina (corn meal made from corn soaked in lime then dried before being finely ground) and a can of chipotle peppers in adobo sauce.

I decided to use the recipe for tortillas on the side of the masa bag and save Stef's chocolate version for another time. There were only three ingredients-masa, salt, and water. I mixed everything together, and Donald kneaded it smooth. We let it rest, divided the dough into 16 pieces, rolled each piece into a ball, then put the balls between layers of plastic and flattened them with a rolling pin.  Some of the tortillas came out less than round, but I figured they'd taste just the same. 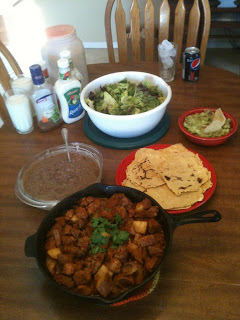 It took 30 second on each side to cook the tortillas in a hot pan.  When they were done I piled them on a plate until dinner time.  Tony couldn't stay out of the kitchen, so he and Donald worked together to make guacamole.  I heated up pinto beans and put everything, along with a green salad, on the table.

The tortillas were darn good (if I do say so myself).  Some of them could have been a little thinner, but for a first try we didn't do too bad.  I'd bought a large pork roast, so there was quite a bit of food left over.  I sent some home with Donald, put some in the refrigerator for tomorrow night's dinner, and froze a couple of cups worth of pork for a meal down the road.

As we were cleaning up after dinner Donald wanted to know if I was going to add tortillas to my recipe repertoire.  I replied that I just may have to.  Any excuse for eating Mexican food is OK in my book!