The birds are coming back from their winter homes.  I'm seeing a wider variety of species at the feeder, which I'm filling up every morning after breakfast.  This morning I woke up a few minutes before my alarm went off.  I took the opportunity to stretch out in bed and enjoy the beautiful symphony of bird calls outside my window.

Now that the birds have returned, they're working on building nests. Someone told me I could put dryer lint out for birds to use in the construction process. I used to take each dryer load's clump of lint out to the compost pile individually.  Over the holidays I came up with a better idea, and hung a small bag in the laundry room for it. The lint's been accumulating since Christmas and the bag is getting full. 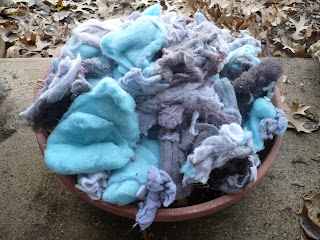 I took the bag outside and dumped it in a flowerpot.  In addition to the normal grey and white lint, I found lint from the aqua-colored flannel sheets we received at Christmas and some wool fibers from my felting experiment.  I left the mass there while I came inside and researched the best way to present it to the birds.

There are lots of things you can do with dryer lint.  Unfortunately, I found out that offering it to birds to build nests with is NOT one of them. Lint hardens after getting wet, so it provides a poor nest surface for baby birds.

I tossed the lint in the compost pile, along with some grass clippings and a layer of leaves.
Posted by Kathy G at 8:00:00 PM