Never A Dull Moment At Work

Even though the preschool where I work holds sessions four days each week, very few of the students in my room attend all of them.  Some days there are more than others, but the group on Tuesday is one of the smaller ones, and today there were two children absent; our morning circle was more of a small arc.  The preschool director must have looked in the window and saw how small our group was, because she came in and asked me if I'd help her with a computer project.  Even though I didn't have much of a choice, I willingly said 'yes' to the chance to do something different.

I anticipated typing, or working on a spreadsheet, but that's not what the project turned out to be. Our staff room used to have two computers for teacher use, but one of them recently kicked the bucket.  My task was to move a computer from the computer lab down the hall and set it up in a cubby along the wall.  And get it connected to the network. 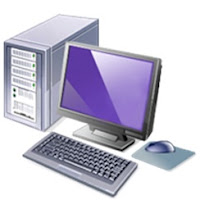 I was confident I could do the first job but not so sure about the second, and I told the director so.  She was undaunted, so we set off toward the computer lab to figure out a plan of action.  Our lab has three computer stations; we decided I'd take the center one.  The director left and I got to work.  Before I disconnected the bird's nest of cables behind the monitor, I labeled each cord with a piece of masking tape, then took everything apart.  It took me three trips to carry everything to the staff room, then I went back to the director for my next set of instructions.

We walked back to the staff room and took a good look at the computer's new home. It needed a power source, but the only outlet was on the other side of the cubby wall.  We decided to put a power strip in the cubby and make a hole through the wall for the cord.  I would have used a drill, but the director had her own idea-she got a hammer and used it with a screwdriver to poke a small hole through the wall, then used the shaft of the screwdriver to widen it.  After a couple of minutes, she turned that job over to me and went in search of a power strip.  Not finding one, she sent her assistant to the store.

While I waited for the essential power source, I worked on enlarging the hole and figuring out where all the computer pieces would go.  The cubby has a desk surface and two shelves--the lower one at eye level.  The top shelf was too high for the CPU tower, and there wasn't enough room on the lower shelf.  The director had a solution; we'd just remove the top shelf!  She got her hammer again and tapped the underside of the shelf, which came off easily.

The assistant returned with the power cord. Sadly, it had a plug that wouldn't fit through the hole I'd made and there wasn't time to work on it before the session was over for the day.  I don't know if someone else will tackle the project tonight or it will be waiting for me tomorrow...
Posted by Kathy G at 8:41:00 PM