One of the things that's been on my List of Things To Do for quite some time is to make felt.  According to a friend, it's quite easy-all it takes is an old wool sweater.  I don't have any old wool sweaters, so I figured I'd get one from the thrift store.  However, the project never rose to the top of my list at quite the right time...I'd usually think about it in the middle of the summer, when cool weather clothes were non-existent.  Last week when I went into the local St. Vincent de Paul store, where they were clearancing all their cold-weather clothes. I did a bit of digging through the racks, and found a black 100% wool sweater and an argyle wool blend for two dollars each.

When you felt an animal-fiber knit garment, the fibers mesh together until the weave of the sweater disappears. The felting occurs when hot water and agitation shrink the fibers,. and the resulting fabric will not unravel when cut.  Only animal fibers will felt, but sometimes garments with a bit of synthetics will work; sometimes they won't.

Here's a BEFORE picture of my two sweaters.  They're both extra large-the one on the left is a men's, and the other is a women's: 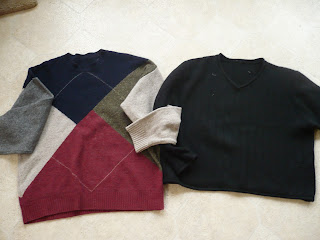 Because all of the information I'd gathered on the project was oral, my first step was to do a Google search for felting wool. I was excited to start the project, so I took my information from the first result.  According to that Website, I needed to run the sweater through my washer with soap and hot water, and then dry it on the hottest setting of the dryer.  I started the process, then browsed through some other Websites on the topic. I learned that it could take multiple passes through the washer to have an effect, and that wool sheds off quite a bit of fiber while it's felting (which could mess up the washer), so it was a good idea to put the sweaters in an old pillowcase.  Whoops!

Sure enough, the process wasn't done after the first round, so I put each sweater in an old pillowcase and closed them with a knot for a second cycle.   When the washer stopped again, I opened the cases to see how things stood.  There was a lot of fuzz clinging to the inside of the pillowcase.  The black sweater looked like one solid piece of material, but the stitches of the argyle one were only partially fused.  Thinking that the heat of the dryer might help, I put both back in their pillowcases and threw them in on a long cycle with high heat.

When they came out of the dryer, they looked like this: 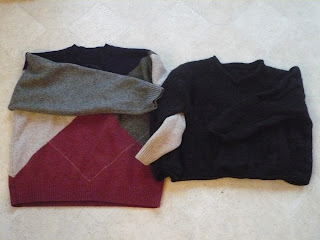