The Cactus League consists of the fifteen Major League Baseball teams that do their Spring Training in Arizona.  When Son Tony moved to Phoenix last year, I knew I'd eventually be at one of them, and on Tuesday it happened.  I attended a game at the Surprise Stadium in Surprise, Arizona.

Surprise Stadium is the one closest to Son Tony's house.  The facility is shared by the Texas Rangers and the Arizona Diamondbacks, neither of which is the team I root for, but it didn't matter.  The crowd was quite mixed.  I saw a lot of people wearing clothes with the Rangers logo, and since the Diamondbacks play in Phoenix full-time there were a lot of "locals" sporting their team colors.  However, there were also a lot of people like me there, too.

The weather couldn't have been better!  The sun was shining, and the sky was clear blue.  I was glad I remembered the sunscreen.  We had great tickets in the first row on the Ranger's side, but when we arrived there was a big crowd of people standing there watching the warm up and waiting to get autographs, so we chose to sit in some empty seats about five rows back. When the game started, we just stayed there, and still had a great view: 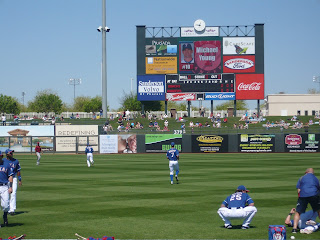 The stadium was much smaller than a typical Major League venue. At this game there was a bit more than 7,000 people in attendance and the stands looked nicely filled. There were also a lot of people seated on blankets on the grass behind the outfield. The game started out quite defensively, but the Rangers scored 7 runs in the 3rd inning (and another in the 8th). The Diamondbacks got 4 in the 6th inning, 4 in the 7th, and another in the 9th to win the game.
Posted by Kathy G at 2:01:00 PM