It's Better Than The Alternative!

Today I had several precancerous lesions burned off with liquid nitrogen.

I have fair skin, blonde hair, and freckles, which gives me a relatively high risk for skin cancer.  On top of that, when I was young there was no such thing as sunscreen, so my skin's had many unprotected years. Two years ago there was a suspicious spot on my shoulder, so now I've been making time for yearly visits with the dermatologist.

The last month or so I've had a couple of places on my back that were always itchy.  Even though I couldn't see them, I wondered if they required attention, so I called the office and scheduled an appointment.  Two days ago I noticed a skin-colored rough spot right in the middle of my forehead up against the hairline.  I suspect most people wouldn't notice it, but I did every time I looked in the mirror.  Since I was going anyway, I decided to have it looked at too.

Traffic was light this morning, and I arrived at the office with plenty of time to spare.  After I checked in at the front desk, the nurse escorted me to an examination room, gave me a paper top, and told me the doctor would be there in a bit. When the doctor arrived, he asked me what I was there for, and examined my spots with a small magnifying glass.  I found out the technical name for my growths is solar keratosis (plural keratoses), and they're common in people over 50. They're due to exposure to ultraviolet radiation and harmless, but they can be uncomfortable and unsightly and a small percentage of them can  become cancerous.  The doctor recommended removing them with cryotherapy.

He left the room for a minute, and came back with a flask of liquid nitrogen.  He took the lid off, dipped a large cotton swab in, and applied it to the first spot.  I could feel my skin burning as the nitrogen froze the offending skin cells. He left it there for what seemed like a very long time (although it probably wasn't more than 30 seconds).  When he lifted the swab up I thought he was done, but he repeated the process a second time, twirling the swab around in a circle. Both of the other spots received the same treatment.  When he was done, he checked out the skin on the rest of my body, gave it a clean bill of health, and told me to come back in a year. 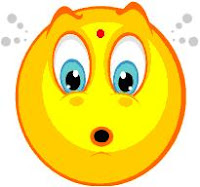 When it was all over I couldn't tell which spot hurt the worst...there were burning pains on both sides of my back and my forehead  The procedure causes the damaged skin to blister, scab, then peel, and should take about a week.. Before I left the medical building, I stepped into the bathroom to check out the spot on my forehead.  NOW it was visible, an angry-looking red blister a quarter-inch in diameter.  I couldn't see the ones under my shirt, but they really hurt, so I suspected they'd look the same way.

Now, a couple of hours later, the redness has subsided but it still looks like I have a large zit at the top of my face. I wonder if it would look better or worse if I put a bandage over it when I go out in public?
Posted by Kathy G at 4:10:00 PM