A couple of weeks ago I felted wool sweaters for the first time.  At the end of the process, they looked like this: 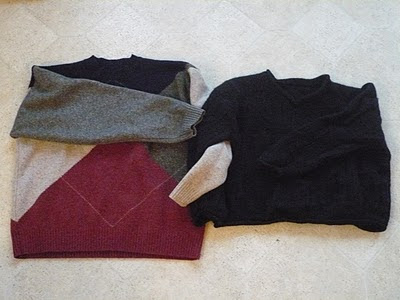 I've been slowly working to transform them into completed projects.  Here's the first, a black purse with dotted Swiss lining and handles: 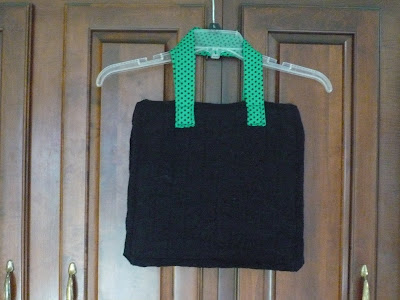 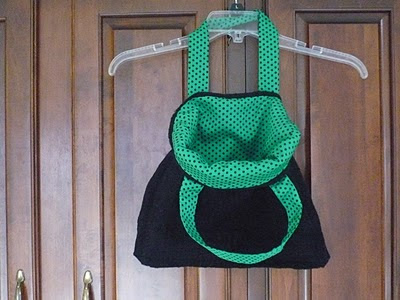 Isn't it cool?  I'd worked out the details of the project in my head, but it took me a while to get started. Even though I was pretty sure the wool had turned into felt, I was scared to make the first cut in case I was wrong!  However, there were no problems; the knitting had transformed into a very thick solid layer that didn't ravel at all.

At twelve inches square, the bag isn't very big.  In the process of felting, the sweater shrunk substantially. I  cut the largest pieces I could from the front and back body sections: 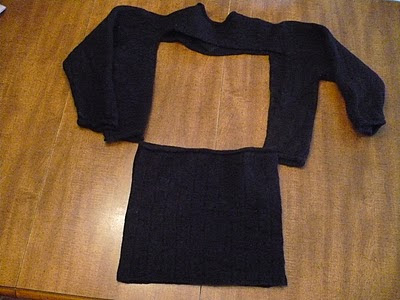 To give the plain black a pop of color, I searched through my fabric stash and found a  partially-constructed blouse that was in a box of material I got from a friend.  I took the seams apart, but left the interfacing in: 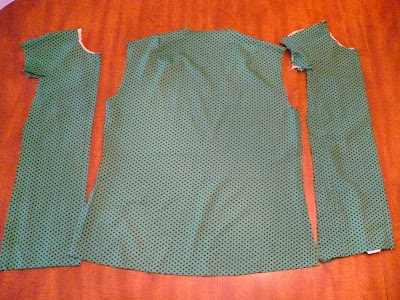 I cut a lining out of the large piece, and strips from the interfacing-stiffened edges to make handles.  I sewed the raw edges of the strips together, turned them, then attached one to each square of felt.  The next step was to join the pieces of felt together.  Because the felt doesn't ravel, I sewed around the outside edges (which alleviated the problem of too-thick turned seams).  I pinned the lining in, then hand-sewed it around the top of the bag.

What am I going to use the bag for?  I'm not sure. After I finished I set it on the island, and later Tony found one of the cats laying on it, but I'm not ready to relinquish it to them.  I wonder if they'd like a throw made from the second sweater?
Posted by Kathy G at 10:25:00 AM