Today was Day 2 of our Phoenix adventure. Son Tony continued being the perfect tour guide and picked out a great activity for us.  We climbed Camelback Mountain, which is a peak in the middle of the metropolitan Phoenix area.

Tony's climbed Camelback multiple times since he's moved to the area, so he knew all the ins and outs.  He told everyone to bring old clothes and sturdy shoes; he provided the knowledge, and lots of Gatorade and water.

After breakfast we got ready to go.  Before we left, everyone put on sunscreen and loaded up their packs with liquids.  The mountain was about a half-hour's drive from Tony's house, which gave me a chance to see the city in daylight.  When we got close, we stopped at a gas station and used the bathroom, because there aren't any at the trail head. We had to park several blocks away from the mountain and walk in on a subdivision street, which was an easy warm up for the main event.

There are two trails up the mountain; we took the Cholla Trail, which was 1.5 miles long and had an elevation gain of 1,200 feet.  At the trail head it looked like a normal hiking trail, but soon the gravel path turned to a boulder-strewn path. Two-thirds of the way up it got more difficult, and close to the summit the only semblance of a trail was blue paint splotches on the rocks guiding the way.

I thought about stopping once, not far from the top, but at that point I'd come too far to not make it all the way, so I pushed on.  I was glad I did.  The view from the top was incredible.  You could see for miles.  It was well worth the effort. 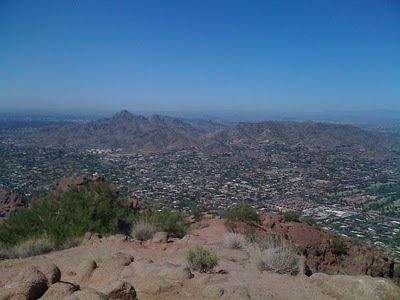 (Brian's picture)
Of course, what you climb you also have to descend.  On the way up our party had stayed somewhat together, with the faster climbers stopping occasionally to let the others catch up.  On the way down the young people left Tony and I to fend for ourselves.  It wasn't too bad as long as I went slow.  I was wearing walking shoes, which worked ok, although I could have used something with a little more tread and higher sides. I had to stop several times to remove pebbles that had worked their way in.

After we got back the bottom we had to walk back to the cars.  The trip was much longer than I remembered, but there was a cooler full of cold water waiting for us, which really hit the spot.

For lunch Tony took us to another interesting restaurant called Chino Bandido Takee-Outee. It serves an interesting fusion of Chinese, Mexican, and jerked food.  My plate contained Jade Chicken, Carnitas, Cuban black beans and jerk fried rice, which all tasted good after my exercise!
Posted by Kathy G at 7:34:00 PM