By The Time I Get to Phoenix

Earlier in the year Son Tony moved to Phoenix for work.  This weekend the rest of the family traveled to Arizona to visit him.

The weeks leading up to the adventure were a flurry of emails and phone calls confirming trip logistics and flight details. To make it easy, everyone gathered at our house--Donald came after work on Thursday night, and Brian and Nicole drove in from Columbia in the morning.  I cooked a pot of pasta for lunch, and we filled our stomachs before we said goodbye to the cats and headed for the airport.

The adventure started right away. Friday was the first day they used full body imaging machines at Lambert Field to screen passengers.  According to what I'd read in the newspaper, the imaging was optional.  However, was a somewhat deceptive term.  The TSA officers picked people to go through the machine; you had the option to do it or choose an alternative screening.  In our group, Tony, Brian, and Donald weren't selected but both Nicole and I were.

I stood sideways in a two-sided portal, put my feet on some marked spots, and raised my hands above my head.  Fifteen seconds later, the scan was finished, but I had to stand outside the machine until an off-site operator looked at my scan to verify I didn't have anything illegal on my body.  I was glad I didn't opt-out; a woman in front of me who declined to be scanned was pulled off to the side, where a female TSA officer was giving her a physical pat-down.

The rest of the flight passed uneventfully.  We arrived in Phoenix and caught a shuttle to the huge consolidated car rental building.  All of the companies were in one place-offices on the main level and car pickup in a parking garage below.  Tony had to do a bit of haggling with the rental clerk to get the car size we'd reserved and fend off all the upsell options, but soon we had wheels. 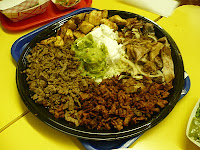 Son Tony was meeting us after work at La Tolteca, a Mexican restaurant/store purported to serve the best food in central Phoenix.  The four guys decided to get a super combination platter--four kinds of meat, served with tortillas, rice, and beans.  Not even my men could eat all of it!  I had an awesome Cuban torta, and Nicole had a combination plate.  Several people ordered Agua Fresca- a drink made from fruit combined with sugar and water.  I got to taste each flavor and try to figure out what kind of fruit it was.

Tony lives in a northwest suburb of the metropolitan area, so after dinner we piled into the two cars and drove to his new house.  Instead of trees and grass lining the sides of the road, there was gravel and cactus, punctuated by the occasional bougainvillea bush.  We arrived at his house, took the Grand Tour, and talked for a little bit before going to bed.  Tony had a big adventure planned for the next day...
Posted by Kathy G at 5:00:00 PM