There's a chill in the air, and it's getting dark earlier. Must be fall.

Back in the spring I decorated the master bedroom with light-colored linens and accessories. All of a sudden they don't seem appropriate anymore. It's time for the duskier colors of the "winter" bed coverings and their coordinating decorations.

Most of the knick knacks and artwork  I use at this time of the year are a motley collection of things I've picked up from clearance tables, thrift stores, and garage sales.  However, there are a couple of special items that remind me of people or places: 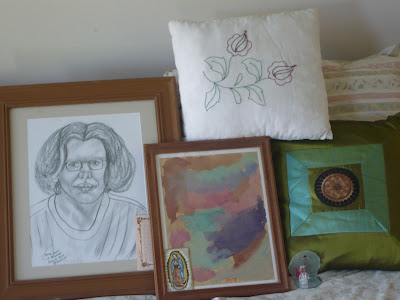