Earlier in the week the forecast said it would be rainy today. Thankfully that was wrong; the rain moved through overnight and by mid-morning it was sunny and beautiful. Tony and I decided it was was time for an adventure. 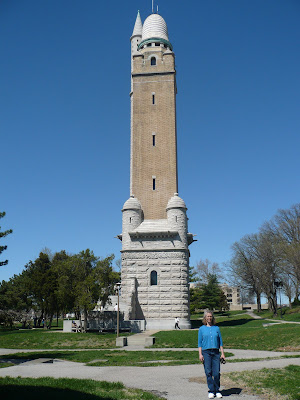 Our first stop was the Compton Hill Water Tower, which is located in Compton Hill Reservoir Park on Grand Boulevard close to Interstate 44. Most of the year the tower is open to the public the first Saturday of the month; today was the first time for 2010.
One of only seven standpipe water towers left in the country (three are in St. Louis), the 179-foot tall tower is listed on the National Registry of Historic Places. The tower was built in 1899, when the city's water system was inadequate for the growing population. The pumps that sent water through the City created surges in water pressure. In an effort to equalize the pressure, a 5 feet wide, 100 feet tall standpipe was built to alleviate the surges. Effective, but not pretty.
The tower was constructed around the standpipe to camouflage it. It was built in the French Romanesque style of rusticated limestone, buff brick and terra cotta. Inside, 198 iron steps spiral around the standpipe, and end in an observation deck that provides a 360-degree view of the city. 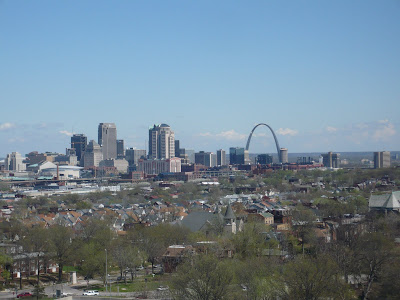 The climb to the top was relatively easy, because there are a number of landings where you can rest and look at photos of the tower construction. When we arrived at the observation deck, there was a sign that indicated we were at 700 feet above sea level. A volunteer was there to answer our questions and point out the landmarks. Because the day was clear, we could see for miles in every direction.... downtown and the Arch to the east, the Jefferson Barracks Bridge over the Mississippi River to the south, the Planetarium and Clayton to the west, and the two other water towers on Bissel Street and East Grand Avenue to the north.
After we finished in the tower and descended back down the steps, we spent a bit of time exploring the rest of the park, then got back in the car and drove east to Kakao Chocolate, a little bit of heaven on Jefferson Avenue.
Kakao makes small-batch artisan chocolates--no artificial flavors or colors. I had chosen to not eat chocolate during Lent, and wanted to break my abstinence in style. Although everything looked appealing, we ultimately decided on two types of Dark Chocolate Bark and a package of fruit marshmallows. The Fair Trade Organic Coffee Bark was dark chocolate, topped with coffee grounds, and the Pecan Bark had large pieces of toasted pecans sprinkled into the dark chocolate blend. Both were awesome. The cube-shaped marshmallows were unlike anything I've tasted before-they're made with real fruit puree.
As we made our way out of the city and toward home, we decided to stop at Amighetti's on the Hill (the Italian section of town) for a "Special" sandwich-ham, roast beef, salami, cheese, lettuce, tomato, pickle, onion, and pepperoncini on great crusty bread. We got the dressing on the side so the sandwich would stay fresh for tomorrow's adventure...
Posted by Kathy G at 9:40:00 PM