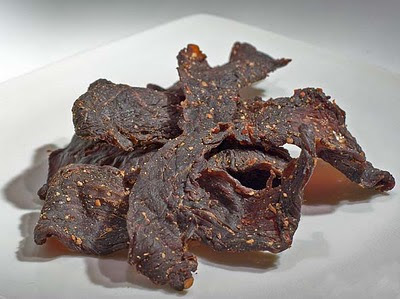 Kusie
MMMM..Beef jerky.
When I got a food dehydrator for Christmas two years ago, it was one of the things I wanted to make.  However, somehow that never happened.  I've made hamburger jerky and dried all kinds of fruits and vegetables, but never got around to the dehydrating a hunk of meat.  Now, though, I've done it.  I've made my first batch of beef jerky.
Son Brian was my mentor for this project.  He's gone through the process several times, so when I had questions I went straight to him.  After getting all the information and gathering the necessary special ingredients, I was ready to get started.
What's the best type of beef for jerky?  Brian recommended a top round or eye of round roast, and indicated that the butcher would be willing to slice it "jerky thin" (i.e.,1/4" thick) for me. At the grocery store yesterday, though, the only round roasts weighed more than four pounds, larger than the capacity o(f my dehydrator.  I )decided that for my first try I'd buy a round steak; it only weighed a pound, so it wouldn't make very much jerky, but the size was manageable, and I could do the slicing myself.
In addition to the meat, most jerky recipes call for two types of ingredients.  There's a dry rub which consists of the curing mix and spices, and a liquid marinade that helps tenderize and flavor the meat.  I bought a curing salt mixture that contains sodium nitrate and nitrite, which protects against nasty things like botulism bacteria which thrive in low cooking temperatures.  The highest setting on the dehydrator is 155 degrees.
According to Brian, everything but the proportion of curing salts to meat is negotiable. My dry rub consisted of brown sugar, onion powder, garlic powder, black pepper, and red pepper, which I rubbed into the steak strips. When I opened the refrigerator to see what we had in the way of wet ingredients, I was inspired by a jar of pickles with one lone piece floating in it. A bit of the pickle brine mixed with a big squeeze of honey make a sweet-sour mixture that I poured over the meat.  I covered the dish and put it in the refrigerator for eight hours.  Right before bedtime I spread the strips on the dehydrator racks and started the whole thing up.  A wonderful smell was wafting through the house by time I brushed my teeth and made it to bed. When we rolled out of bed in the morning it was finished.
The round steak actually worked quite well.  It was thin (about an inch) so the finished jerky ended up being more like beef sticks than the bigger pieces I'm used to, but it tasted wonderful.  The red pepper gave it a spicy kick. Since the meat was so lean to start with, it didn't shrink as much in the drying process as I expected.  The jerky fit nicely in a pint sized plastic container, but I suspect that container will be empty soon!
Posted by Kathy G at 8:15:00 PM