Every Picture Tells A Story

Each spring and fall I change up our bedroom with different bed linens and accessories.  Today I took the "winter" duvet cover off the comforter, removed the bed skirt, and gathered up all the dark-colored accessories.  I dressed the bed with the "summer" cover and bed skirt and got out the new set of artwork and accessories.  I've collected the items over the years, and each of them has a story. 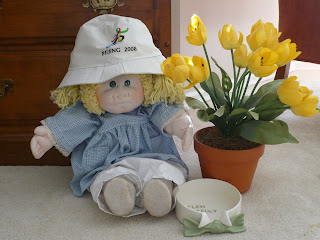 The knockoff Cabbage Patch doll was a present to my mom in the early 1980s. I had a friend of hers make it.  She's wearing a Beijing Olympics hat that we purchased on our trip to China in 2005, before the event was even on the radar for non-athlete Americans.  The tulips were a hostess gift from a progressive dinner we were part of, and the dish belonged to Tony's great uncle Clem. 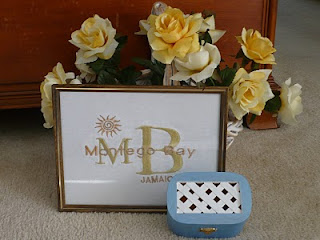 Montego Bay was one of the ports we stopped at the second time we cruised as a family.  While we were there I bought an embroidered t-shirt that met an untimely death; I liked the embroidery so much I cut it out and framed it.  The blue box was a present from a friend, who got it from another friend who was a missionary.  Tony gave me the white wicker basket filled with small potted plants; the yellow silk roses were actually bought from a craft store. 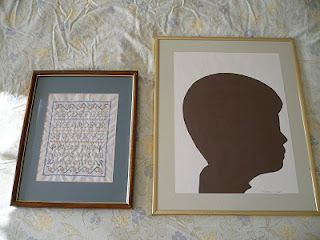 The frame on the left holds a cross-stitch sampler my friend Sydney gave me for a birthday present way back in 1989. (She was thoughtful enough to write the date on the back.)  The silhouette of Son Donald is from early elementary school.

When I was done reminiscing, I hung the frames, arranged the things on the shelves, and took a look around the room.  What a lot of memories it holds!
Posted by Kathy G at 8:45:00 PM