Trick Or Treat, Smell My Feet, Give Me Something Good To Eat !!!

With Tony in Los Angeles, I'm by myself this Halloween. I decided to celebrate it by staying home and handing out candy. I really enjoy seeing all the different costumes and hearing all the corny jokes the trick-or-treaters come up with.

When we moved into this neighborhood 17 years ago there were a lot of young families, but as the subdivision is getting older, there are fewer kids. Last year we had about 100 come to the door; since tonight was Saturday night, I figured we'd get the ones from our subdivision and the other nearby ones. 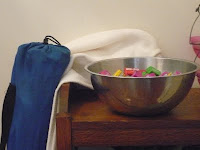 I wasn't sure what time we'd start getting trick-or-treaters, so at 5:00 I opened all the bags of candy, poured them into a bowl, and put the bowl by the front door. I also added a folding chair and a fleece throw; my plan was to sit in the chair on the front porch once kids started arriving, so I wouldn't have to keep getting up to open the door. 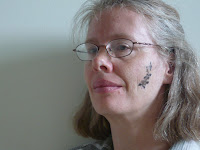 At 5:30 no one had shown up yet. I was bored, so I decided to give myself a black rose spray fake facial tattoo. Later in the evening a girl told me it looked like I had a huge scar on my cheek. 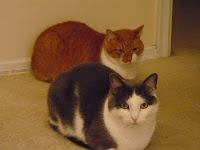 When 6:00 rolled around without anyone ringing the doorbell, I looked out the front window to see if anyone was on the street. (There wasn't.) It was getting dusky, so I turned on the porch light and the foyer light inside the house. At 6:15 I heard a group of kids on the street behind us. I figured they'd be coming my way soon, but the cats (who hide upstairs at the first sign of action) didn't look too concerned. It turns out they were right. No trick or treaters. 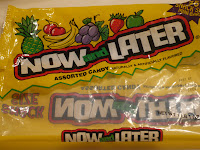 At 6:30 I started computing how many calories I'd consume if no one came to the door all night and I had to eat all three 36-count bags of Snack-Size Now and Later.

FINALLY, at 6:43 the doorbell rang. A group of nine kids was arranged on the porch. After they all did their tricks (every one of them a corny joke), I handed out the candy and they ran down the driveway. They were followed a few minutes later by a second group. I debated whether I should move out onto the porch, but decided to wait until it got busier.

By 7:00 three groups had come to the door. I broke down and had some candy from the bowl. I didn't think I needed to worry about running out! At 7:15 I had some more candy. At 7:30 I had a stomach ache from too much candy.

We either don't have any small children left in the neighborhood, or they skipped my house, but we had more than our fair share of middle schoolers and high school-aged kids. Although the traffic never got steady enough to think about sitting outside, when I turned out the lights at 8:45 more than two-thirds of the candy was gone. My Halloween was officially over.

Best costume: A homemade Happy Meal. The young man cut a hole for his body in the bottom of a large square box, painted the box red, and glued on a McDonald's logo.

Worst costume: A preteen (maybe ten years old?) dressed in a skimpy outfit that would have been R-rated if she had any body curves at all.
Posted by Kathy G at 9:06:00 PM