Tony will wrap up his first chunk of job training next Friday, but this weekend I visited him at his home away from home in Anaheim, California.

My flight Thursday night was uneventful, although with the time change I arrived quite late. Tony was waiting for me when the shuttle dropped me off from the airport; it was great to see him.

Friday morning he had to get up and go to class, but I lounged around his room until mid-morning. Even though he's staying in a hotel, he's got a nice setup. There's a small refrigerator and microwave, and one drawer of a bedside table has become his "pantry"-there's a jar of peanut butter, bread, and snacks. For breakfast I had some grapes, a cup of cereal, and coffee. I ate while flipping channels on the TV, watching whatever I wanted! 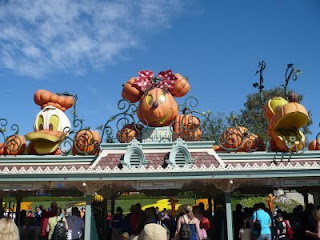 After breakfast I got a map of the area from the concierge and discovered that Disneyland was only a twenty-minute walk away. Unlike the spread-out setup of Disney World in Orlando, the original park is quite landlocked and accessible on foot. I was meeting Tony for lunch so I had no time (or desire) to buy a park ticket, but I had a great time people watching in the entry plaza and seeing the decorations-here's Donald Duck, Minnie Mouse, and Goofy perched atop the entrance to the park.

It was getting a bit warm and my feet were getting tired, so I returned to the hotel to wait for Tony. We ate lunch in the hotel food court and I got to meet a couple of his co-workers. When they all went back to their classroom I had the afternoon free. I brought my book to the pool, sat in a chair in the shade and read for a couple of hours, then went back to the room for a nap.

When Tony was finished for the day we walked to a nearby restaurant that billed itself as "Contemporary California Cuisine". The temperature had cooled off, and it was wonderful to eat outside on the patio. After dinner we walked back to the Disney property, and browsed through the Downtown Disney shopping and dining promenade that's located next to the theme park. There were a lot of people there with Halloween costumes, some of them quite fancy. My favorite was a whole family (Dad, Mom, and two boys) dressed as pirates.

We ended the night with ice cream and a walk through another shopping and entertainment area on our way back to the hotel. I was exhausted and ready to fall into bed.