Driving In My Car

Saturday's California adventure started bright and early. Tony had e-mailed me some ideas for the day and I had chosen my favorites. I knew that he was going to rent a car for the day, but I was surprised (and quite pleased) when I found out these were going to be our wheels: 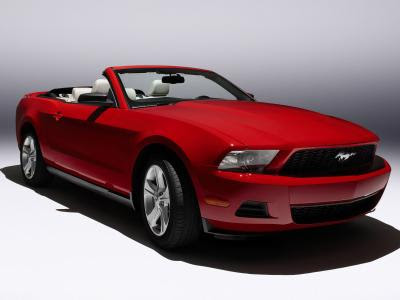 We were the "owners" of a red Mustang convertible for the day. Top down, we left the parking garage and started our exploits on a beautiful sunny day.

After a nice drive, our first stop was Venice Beach. We watched the surfboarders from the pier, then took our shoes off and walked on the beach. Even though I had my pants rolled up, they got a bit wet at the bottom from the waves. To get back to the car we strolled along Ocean Front Walk, which was full of vendors and entertainers. We browsed in a few of the stores, bought a painting of the circus-like boardwalk from a sidewalk artist, and saw the famous Muscle Beach. Back at our car, we started towards our next destination.

The Farmer's Market in Los Angeles is a landmark destination. We intended to get lunch there, but had trouble finding a place to park so we went across the street to a Whole Foods. After we ate, we walked across the street and spent a bit of time browsing through the market. Tony got a cup of coffee and I bought a container of golden raspberries (which we quickly polished off).

A tourist trip to Los Angeles probably wouldn't be complete without a stop in Hollywood. Our plan was to look at the outside of Grauman's Chinese Theatre and the Kodak Theatre, see the Walk of Fame, then leave. However, a street vendor made us a great deal on a movie star home tour, so we spent a couple of hours in an open-air van seeing where the stars lived and other notable places in the city. Our tour guide was very entertaining and a full of information. I particularly enjoyed the drive on Mulholland Drive, which follows the ridgeline of the mountains and provided great views of the valley.

After we finished the tour, we had to head quickly to our last stop of the night in Huntington Beach. It was only 30 miles, but we ran into a bit of legendary Los Angeles traffic (the only time all day) and arrived just in time for our dinner reservations. Tony had chosen a Hawaiian restaurant located along the waterfront. We had a great view of the water, although the sun went down halfway through dinner. They only serve specific fish during certain seasons, so everything is very fresh. I had ono, which was new to me, and Tony chose barramundi. After we chose the fish, our waiter recommended the best preparation for it. Both entrees were wonderful.

I got an opportunity to drive on the way home. Even though it was too chilly to have the top down on the car, it was still a thrill to drive a vehicle with a lot of horsepower. Although we didn't really need to, Tony figured out a route that included a little bit of highway driving. Back in Anaheim, we stopped at a grocery store so I could buy some snacks for the trip home the next day. On our way back to the hotel, Tony realized that it was about time for the nightly fireworks from Disneyland, so we parked the car in a McDonald's parking lot, put the top down, and watched the action. Sadly, it was then time to take the car back. We dropped it off in the parking garage, locked it, then put the keys in the drop box in the hotel lobby. Adventure over.