Today the students at my preschool put on their costumes and walked across the parking lot to the senior center next door for a Trick or Treat visit. Many of the senior center residents were giving out candy. Some were seated in the lobby, and some were in front of their apartments, so we got to travel down each hall on the first floor.

Each apartment had a small alcove outside the front door, and many of the residents had personalized theirs. It was interesting to see all the different things; some had seasonal decorations on the door or a table holding items. One man had a poem, along with a picture of his wife. I even saw one area that contained a painting of a fighter jet above a table that held a model plane.

The students looked wonderful. All of the girls were regal. There was a princess, a Queen of Hearts, and a Snow White. The boy's costumes were a bit more wide-ranging; a Spider Man, a knight, a lady bug, and a "Thing" from a Doctor Seuss book. One of the special needs children got agitated when we asked him if he wanted to wear his costume, so he just went in his street clothes.

I was less than impressed with the efforts my fellow staff members in the costume department. Half of the people didn't dress up at all, and the rest just had on some type of Halloween clothing or street clothes with a simple accessory like a wig or a headband with ears. I had decided I was going to wear a costume, but I didn't want to spend a lot of money. When I found a Hawaiian muumuu in shades of blue, green, and tan on a shopping trip to Goodwill I had my inspiration. I bought a lei at a party store, and dug out a plastic orchid from the Halloween box to pin in my hair. It was too cold to wear flip flops, but I put on a pair of hose and dug white sandals out of storage to give the outfit the proper island feel. Total cost was $7.00. An additional bonus was that the costume was quick to put on and take off -- I did it in less than five minutes--because I didn't put it on until I got to work. It was too cold to wear it in the car.

I brought my camera to take pictures, but in the busyness of the morning I didn't even pull it out! You'll have to take my word for it that I looked great in my costume: 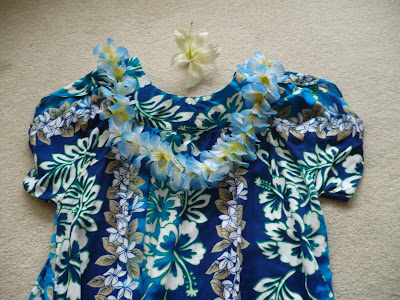 Many of the students had nice things to say about my ensemble. The one I liked best was the girl who told me I looked "Hulaweeny". What a great summation!
Posted by Kathy G at 9:10:00 PM