I don't know how I possibly missed it on CNNBC, but my friend Denise has sharp eyes and saw the announcement from the National Maternal Society that I won the 2009 Mother of the Year Award. She was nice enough to email it to me. 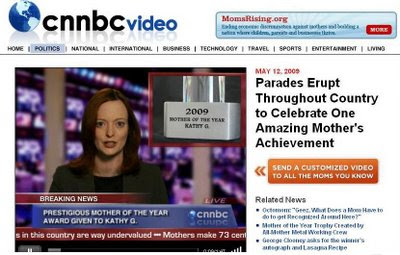 Among my achievements, I was honored for ..."selflessly contributing 52 hours of every day to people other than myself" and "initiating cleanup of toxic waste buildup in TV rooms and closets." Beyoncé was one of the celebrities that paid tribute, saying that "one day she hoped to be a mother just like the mother of the year...only much richer". Even President Obama had words of praise!

The video, of course, was fake, but a lot of fun. It looked just like a cable news show, complete with scrolling text bar at the bottom and related news headlines. My name was written into the clip about a dozen times.

At the end of the video, I was offered the opportunity to send it to other moms. I guess I can share...
Posted by Kathy G at 4:17:00 PM