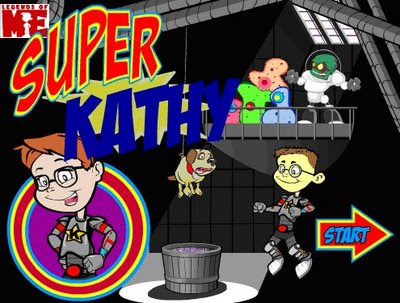 The Internet is filled with myriad time wasters. I got sucked in tonight when I made an "animated interactive adventure" at the Legends of Me Website.

The stories were designed for someone many decades younger than me, but it was still a lot of fun. You get to make a customized character, specifying its name, sex, age, favorite color and favorite city. The character can sport one of several hairstyles and skin colors, can wear glasses or not, and is clothed in a t-shirt and pants (with multiple color choices for both). Every good hero in an adventure story needs a sidekick, so the Website allows you to pick a friend with all the same choices in personalization.

After the characters are set, they get to play the starring roles in one of four adventures. My character's name was Kathy, so my story choices were:
The story's plot was quite detailed, and had multiple interactive elements. At several points in the story I controlled the plot by choosing one of several options, and a couple of times there was a mini Flash game integrated into the storyline that didn't take much skill at all.

My story ended happily when I saved the day by defeating all the bad guys, so I could go to bed satisfied that all was right in the world.
Posted by Kathy G at 10:05:00 PM