This isn't a great time of year for produce. All of the "winter" fruits are past their prime, and it's too early for warm weather varieties. I really enjoy eating fruit, though, so when I saw something different at the grocery store today I had to buy one and check it out. Today I ate an aprium. 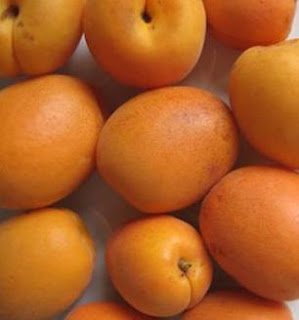 I had no clue what the apricot-looking fruit was, but the tag next to the bin told me it was a cross between an apricot and a plum. After a little research, I learned that the aprium is a combination of ¼ plum and ¾ apricot (not to be confused with the pluot which is ¼ apricot and ¾ plum). Floyd Zaiger of Zaiger Genetics developed both hybrids a couple of decades ago. Both fruits are the result of cross-pollination, and take a couple of steps. First, a plum tree is cross-pollinated with pollen from an apricot tree. The seeds that result from the cross are planted, and the second generation fruits are called plumcots, or ½ plum and ½ apricot.

The aprium was the size of a small plum, but could easily be mistaken for a very large apricot. The fruit resembled an apricot on the outside with just a hint of fuzz. The flesh was bright orange, and tasted like an apricot with a plum aftertaste. It was sweeter than an apricot would be.

At $2.99 a pound the apriums were a bit pricey, but they were small so I only paid about a third of that for the experience of trying something new.
Posted by Kathy G at 2:20:00 PM