Wish You Were Here

Hubby Tony and I haven't gone out in large crowds much since Covid started, but when I got a post card from the St. Louis Symphony promoting their "Music of Pink Floyd" concert we talked about it, then ended up buying tickets for each other as a Valentine's Day present. 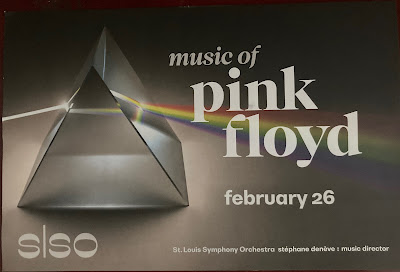 Part of our thinking was that we knew that the Symphony was serious about health and safety guidelines. Before we could enter the building we had to show a proof of vaccination (or proof of a recent negative test for those who chose not to be vaccinated) and wear a mask the entire time we were in the building. Before the show and during intermission ushers walked around, using stern voices to  remind people about the rules.

When Tony and I arrived just a couple of minutes before the doors opened we joined the line of people in the lobby. Once the doors opened it only took a couple of minutes to have our tickets scanned and enter the building. Powell Hall started out life as a theater, but has been the home of the Symphony since the mid-60s. Its Grand Foyer was modeled after the chapel in the Palace of Versailles. The walls are accented with gold leaf, the floor has red carpets, and the chairs and railings are covered in red velvet.

The building is opulent, but it also has excellent acoustics. We could hear clearly from our seats almost at the top of the auditorium. The band (guitar, bass, keyboard, drums, a singer, and two backup singers) was set up in the middle of the stage with a large clear plexiglass shield separating it from the symphony, which was arranged in a semicircle around the sides and back of the stage..

From my perspective at the top of the auditorium the conductor didn't seem to have much to do. Both sets of musicians paired together and played as one.  In the calendar section of Friday's newspaper the blurb had talked about hearing "lysergic classics", which I assumed meant the psychedelic, trippy vibe of some of Pink Floyd's music. The first half of the program ran through the Dark Side of the Moon album. After intermission they mixed songs from The Wall and Momentary Lapse of Reason. 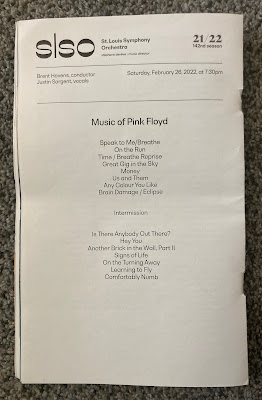 Each half was almost an hour in length, but felt much shorter than that. At the end of the regular program Tony started gathering up his things to leave, but I told him I wouldn't leave my seat until the house lights came up. There were encores songs from The Wall, and Wish You Were Here. But then it was time to join the stream of people down the stairs to the lobby and out the door.